In July, your guys came up here and did a bike show for our Festival. My 4 yr old daughter, Savanah wanted to watch the show with me. She developed a crush on Kenny Short. Like all children her age, I guessed the crush would end when she didnt see him anymore. However, I was wrong. DEAD wrong. About a week or so ago we watched the X Games on tv and she kept asking me if one of them was Kenny! So, of course I picked out a few guys that looked similar and told her that they were Kenny. (I know, Im terrible, but she looked so excited to see him again) So far, Kenny has done skateboard tricks, BMX bikes, and snowboards!

At the festival, he autographed a postcard for her with her name on it and she has sinced had me frame it and put it on her wall. She says “good night” to Kenny every night.

I just wanted everyone to know that it is really great what you guys do and how impressionable you are. Its really a good thing. I know that you have made a big impression on a little girl and I really wanted to thank you.

Have your own fan letter or story about TCFF? We’d love to hear! 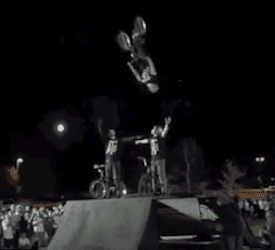 A Good Day at The Factory Edit 3: Bike Swing Edition !